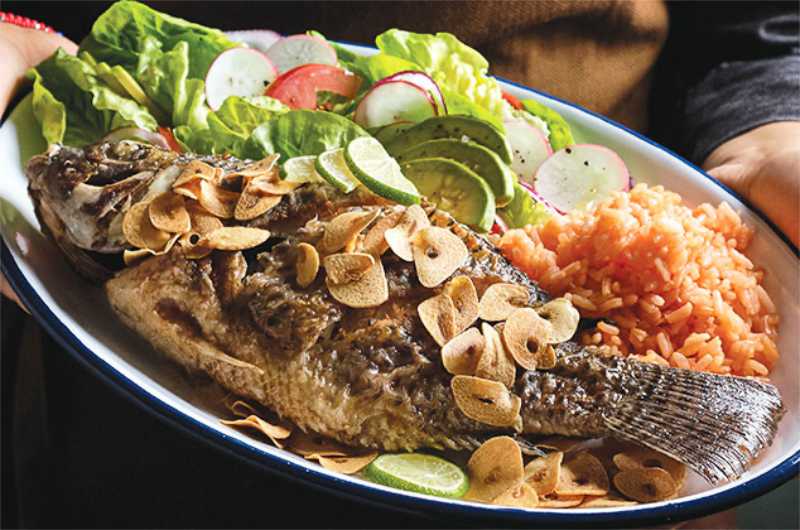 Also: an Apache Concerto, the best fish dish ever, and my week in Mexico

My eye was caught this week by the latest research from Cambridge University with the fetching title “Practise really does make perfect”. Well, that certainly puts my scribbles in perspective! Now this new research gives it a scientific stamp of authority. It goes further, it gives the green light to learning slightly different techniques at one and the same time. For example: free stroke and rest stroke (tirando and apoyando). I had to read it several times to understand it, and will tell you all about it. By the time I had grasped the essentials, I was sorely in need of nourishment. So allow me first to enthuse about a Mexican fish dish called mojarra al mojo de ajo before telling you more about this important article.

It helps, of course, that I am currently stationed in Mexico and was already familiar with this fantastic fish dish. So I rounded up a few friends and insisted we go to the restaurant which cooks it best. This is a completely unassuming venue, frequented by local people, with absolutely no frills, or airs and graces. I won’t tell you where it is otherwise coach-loads of eager fish-eating tourists might descend upon it and ruin it. So what’s all the fuss about? Mojarra al mojo de ajo is perch fried in garlic which is chopped into tiny pieces and scattered across its body, accompanied by chopped green pepper and rice.

After this culinary delight I returned to my stables to carry on my preparations for next week’s recording in Oklahoma of Once We Moved Like The Wind. This is a concerto for two guitars and guitar orchestra by Brad Richter. Inspired by and partly based on Apache themes the three movements require humming, whistling, stamping and other effects from the orchestra, as well as conventional playing. Dedicated to the great Indian chief Geronimo it is hugely evocative and very moving.

More about that new research:

“Researchers from the University of Cambridge found that the particular motor memory which is active and modifiable in the brain at any given time depends on both lead-in and follow-through movement.”
OK, stop there. Think of “lead-in” as the right hand finger movement towards the string, and of “follow-through” as the movement after you play the string. So, both movements are remembered by the brain separately.

…”and that skills which may otherwise interfere can be learned at the same time if their follow-through motions are unique.”

Well, you could knock me down with a feather: I have been saying the same thing in musician layman language for years. The approaches to the string playing tirando or apoyando are almost the same (the lead-in). But the release of the string is different (the follow-through). What is significant for guitar players is that by separating in one’s mind these two elements we can give a huge helping hand to the brain’s learning process. By doing so, the free and rest strokes techniques can easily be assimilated.

I have to admit I did mull over the article’s learned prose and implications even as I got stuck into the fish. Apache notes flitted across my brain waves too, laced with the pleasure of a garlic dressing. And why not? Such is life.