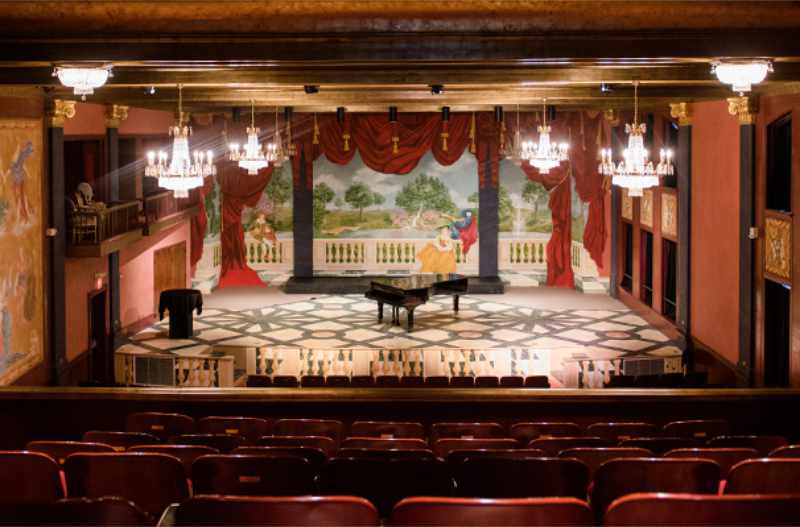 Leading The Guitar In The USA
Published: 19 September, 2014 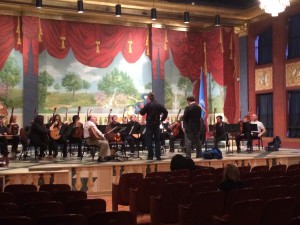 15th Septemner 2014, at the Enid Symphony Hall, Oklahoma, with Brad Richter explaining a point of interpretation to the orchestra, with Matt Denman the conductor on the right.

I left London for the USA on 9th September not knowing whether I would return to a United or Disunited Kingdom. Would I need a work visa to play gigs in Scotland? Would there be border patrols to keep the English out from crossing over illegally? Well, I have found out this morning that neither event shall come to pass, at least not until another referendum turns this one upside down. While I have been in the USA Presidential announcements (or more accurately pronouncements) have made more likely the 3rd incursion in 22 years into Iraq by America, together with whatever Allies it can scramble together. Now that is quite a lot of momentous activity on the world stage to be getting on with in the space of 7 days, and enough to make a humble plucker such as myself feel as insignificant as a grain of sand about to be roughened up by stormy weather. Funnily enough, I did run into the left-overs of hurricane Odile in Arizona and was warned about the possibility of death by drowning in the Arizona desert. Yes, you read that right, in the desert! Flash floods, creepy crawlies and snakes seeking shelter up my leg, military aircraft speeding past overhead (to Iraq?), the wail of exquisitely out of tune bagpipe players with knobbly knees heralding (or not) a new Gaelic dawn – all this I imagined, and some of it I even experienced.

Right, back to business: my first stop was Oklahoma City and rehearsals with Brad Richter for the world première of two movements from his Concerto for 2 guitars and Guitar Orchestra. I also had to revise the work we had first played in January: the 3 duos of fiendish difficulty and rhythmic complexity, enough to drive a calm type like me to total distraction until I got it right. But before I tell you more about the première you have to understand the background. Pardon my flippancy; I am not referring to music but to the Oklahoma spoken accent which is the cutest of all the American variations on our dear language. To an Englishman it is the stuff of Hollywood and cowboy films. It took me a few hours to actually hear what people were telling me since I could not get past just listening to their mode of speech. If Buffalo Bill and Davy Crockett had strolled in wearing head gear made out of fox tails, sat down and tuned their guitars ready to play in the Guitar Orchestra I would not have been surprised. But they didn’t, instead some 75 young people ranging from approximately 10 to 20 years of age took up their positions.

The concerto takes its inspiration from Apache culture and history
Brad Richter has listened to hours of archive material and composed a moving and hugely accomplished work inspired by it, even borrowing Apache musical themes, stitched together with sound effects which include “prepared” guitar, whistling, and foot stamping. One movement takes its title from a phrase spoken by the great Apache warrior and leader Geronimo: ”once we moved like the wind” – a reference to how the tribe on foot evaded capture by the American army for years.

We repeated the concert a few days later in the Enid Symphony Hall, Oklahoma, a beautiful space which could easily have been transported, brick by brick, fresco by fresco, from 18th century Europe. This time the orchestra was reduced to some 25 players and conducted with great authority by Matt Denman, who manages the guitar teaching programmes in the state. The concerto received a standing ovation just as on the previous occasion.

And where, I hear you ask, do you get 75 young guitar players?
They come from different schools who have been made an offer they find difficult to refuse: guitar teaching free at the point of consumption. The same goes for Brad Richter’s own idea – Lead Guitar. He, together with a like-minded group of idealists, including some brilliant fund raisers, has turned Lead Guitar into an important organisation for teaching guitar in schools. This has now made guitar players of close to 11,000 students in 5 states across the nation. I got to meet and teach some of these students on my next stop in Tucson, Arizona. Brad has devised a carefully graded course, based in the initial stages on group learning and ensemble playing. This, in my opinion, is a brilliant approach. Teachers at local schools are trained in-house – some of them are only a few steps ahead of the students, but have the advantage of being experienced teachers.

Remember how world events were making me feel a humble plucker as insignificant as a grain of sand, at least on my arrival? Well, not so by the end. To see so many children and young people dedicated to a musical instrument, to know they turn up for rehearsal week after week, to see them undertakes the rigours of practice for a public event – this was enough to make me look up and realize that although a single grain of sand alone may not amount to much, a beach made of many together create something beautiful and ever-changing and eternal, an affirmation of a lot that is worthwhile in life itself.